In my previous post, I commented on a recent phenomena this past year in which a number of customers who had purchased an EMF meter online or elsewhere to do a survey on a prospective property contacted me after finding what appeared to be anomalously high readings and wanted a second opinion.

Every time it was a Trifield 100XE which is easily recognizable with the yellow label, brick-like construction and familiar needle movement which distinguishes it as an analog meter versus the digital EMF versions. The variations in accuracy varied from moderate to extreme when compared with my 3-axis professional grade meter and I began to wonder what was going on.

I recently contacted the manufacturer of the Trifields (AlphaLab Inc.) and one of their electrical engineers cleared up the mystery as to why the readings seemed to vary so wildly. The 100XEs are typically sold as frequency weighted which means that even slightly higher frequency magnetic fields will add even more to the indicated reading than a meter with a “flatter” frequency response. Also, they measure from 40 Hz – 100 KHz which is a VERY broad band for an AC gaussmeter used in a EMF survey for testing the influence of power lines. Typically, for measuring 60 Hz and any relevant power harmonics, an EMF meter that measures in the range of 30 Hz – 3 KHz is a broad enough range and even 30 Hz – 300 Hz will cover 60 Hz plus the 5th harmonic. The strength of the harmonics gets progressively weaker as frequency increases. 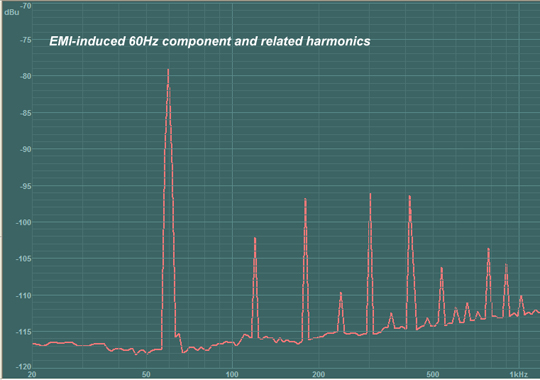 In other words, you may have a 3 milliGauss magnetic field at 60 Hz, but a weaker magnetic field at 120 Hz will weight the reading even more strongly and register as 6 milliGauss when in fact it is only 3 mG.  (from an excerpt on the company website) So the standard Trifield 100XE weights the “harmonics” (multiples of 60 Hz such as 120 Hz, 180 Hz, etc.) differently than a flat frequency EMF meter. Ordinarily, any instrument that is frequency weighted has an attendant chart which tells you how much more weight at different frequencies is measured than over the non-weighted frequency point of the meter.

Below is an example of this sort of chart for the Natural EM Meter (blue label) which is very different from the 100XE model. (This was taken from the vendor website – I know the word “frequency” is misspelled)

Based on my experience, I can interpret the chart, but what I wanted was the chart for the 100XE model Trifield and I could not find it on the manufacturer’s website. This is what initiated the call to the vendor. When I spoke with an electrical engineer, she explained that the 100XE is not particularly accurate (rated as +/- 20% according to the specs on their website) and is not recommended as a reference for any type of serious EMF survey.

Furthermore she went on to explain that even the manufacturer has NO SUCH chart for the 100XE model so you really don’t know what you are reading and how much is due to the 60 Hz magnetic field that you are interested in and how much is distorted or misrepresented by the high frequency harmonics.

And to further dispel another myth, the Trifield is named for the fact that it measures 3 types (tri) of fields: magnetic, electric and radio frequency, NOT because it is a 3-axis meter in every mode as the RF (radio frequency) measurement is only in SINGLE or 1-axis and will alter greatly depending on the orientation of the meter with respect to the RF source.

But I am not disparaging the company at all (they make some excellent equipment for certain applications and their website is very informative) and the 100XE has some viable uses, but it seems to be more towards something more subjective like the paranormal field rather than what a serious EMF consultant would choose for an official EMF testing survey. I DO like the needle movement as it does help you to track slow or fast fluctuations so I do keep a Trifield with me, but the difference is that I know under what circumstances it can be used and also when I would not use it as an absolute for helping a client decide on a property decision because of the proximity of power lines.