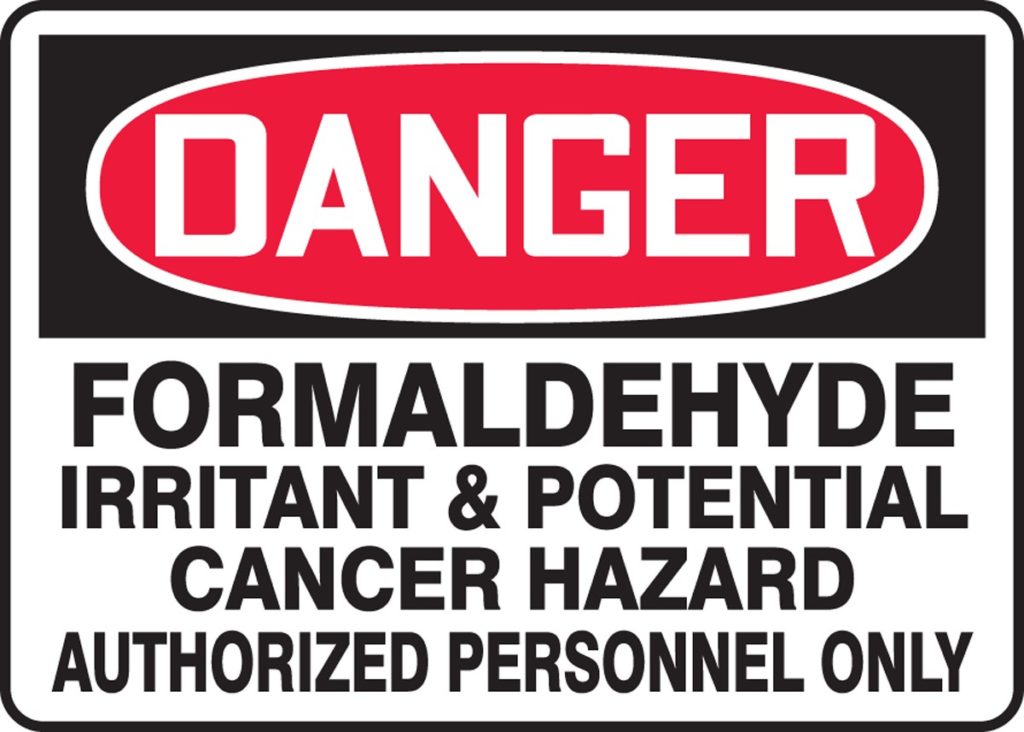 Formaldehyde (Chemical formula CH2O and also known as Methanal) is a colorless, water soluble gas at room temperature with a pungent, irritating odor at less than 1 part per million. (1 ppm – and detectable as low as 0.83 ppm) It is an inexpensive chemical with excellent bonding properties produced in high volume throughout the world. A major use is in the fabrication of urea-formaldehyde (UF) resins used primarily as adhesives when making plywood, particleboard and fiberboard. In the 1970’s it was a component of UF foam insulation in sidewalls until it was banned in 1982 by the U.S. Consumer Product Safety Commission because they found levels as high as 4 ppm. (but the ban was later overturned)

Due to it’s very low boiling point of -19 Celsius, formaldehyde is technically a VVOC (Very Volatile Organic Compound) and has very strong chemical and photo-chemical reactivity. It is commercially available as formalin which contains 38% formaldehyde and 6% – 15 % methanol.

Many common household cleaning agents contain formaldehyde and other sources include cigarette smoke and the combustion byproducts of gas / wood stoves and unvented space heaters such as kerosene heaters. It can also be found in paper products such as facial tissues, paper towels and grocery bags.

In general, emission or outgassing rates of formaldehyde increase with temperature, humidity, wood moisture content and decreased formaldehyde in the air. (due to passive diffusion) Generally, some remediation can be found by decreasing humidity and temperature, sealing materials with vinyl wallpaper or non-permeable paint and increasing ventilation. (air exchange rates)

Plywood is composed of several thin sheets of wood glued together with UF copolymeric resin which originally had a high HCHO to urea ratio of 1.5 to 1 to ensure adequate chemical cross-linking of all primary and secondary amino groups. Because the excess HCHO outgasses significantly and subsequently caused health complaints, this ratio was reduced to 1.05 to 1. Particleboard (compressed wood shavings mixed with UF resins at high temperatures) can emit formaldehyde continuously for comparatively long times; from several months to several years. Medium density fiberboard (MDF) was found to be the highest emitter of formaldehyde. Elevated levels are more likely to be found in newer homes with pressed wood materials such as flooring lumber mixed with the UF resin.

UF wood adhesives have excellent bonding performance, but are somewhat chemically unstable and release monomeric formaldehyde due to hydrolysis of the methyol end groups and sometimes the methylene bridges themselves. This means that hydrolytic decomposition and outgassing of HCHO is dependent on moisture levels, so UF-bonded wood products are primarily for indoor use where humidity levels are typically controlled.

Emissions do tend to decrease with time as the materials out-gas, age and cure. It is also used in the production of urea-formaldehyde foam insulation. (UFFI)

While there are several other sources of formaldehyde such as wood and forest fires, cigarette smoke, motor vehicle combustion, and decomposition of methane by sunlight and oxygen, etc. indoor levels are generally higher than outdoor levels. (10 – 20 parts per billion or 0.010 ppm – 0.020 ppm but may reach levels of 50 ppb in areas with significant photochemistry / smog ) 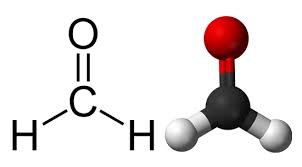 Formaldehyde is also produced in the human body in small amounts as it is a metabolic byproduct of drinking alcohol (ethanol) among other chemical pathways. But the amount is relatively small and rapidly broken down into formic acid.

Individual sensitivity to formaldehyde varies, but from 10 – 20 % of the population appears to be highly sensitive to relatively low concentrations. This may be a result of TVOC (Total Volatile Organic Compound) synergy with other pollutants. The principle symptoms experienced are irritation of the eyes, nose, throat, dry facial skin and asthma like symptoms. (difficulty breathing, constriction of the bronchial tubes) Higher concentrations may even lead to headaches, fatigue, insomnia, nausea, unnatural thirst, menstrual irregularities, epistaxis, (nosebleed) coughing, chest / abdominal pain, and rapid heartbeat. (tachycardia)

Allergic dermatitis may occur from skin contact. There are also neurological-like symptoms in some, (including depression) with the chance of potential sensitization and even upper respiratory system cancers. There is some controversy about the cancer causing / carcinogenic effects with some evidence showing that risk only substantially increases at very high exposure levels such as in occupations which deal directly with formaldehyde such as embalmers and anatomists. But formaldehyde has been shown to be genotoxic in cell cultures which causes damage through DNA cross-linking, single strand breaks and chromosome aberrations which indicate that HCHO is mutagenic as well.

Regardless in testing, levels as low as 0.25 ppm (which is below the detectable odor threshold) significant eye and throat discomfort increases in frequency. Chronic bronchitis and asthma are more prevalent in children in homes with HCHO levels in the 0.06 – 0.12 ppm with a 22% decrement between the two values.

One of the first issues to address for pre-existing construction is proper selection of materials that have low VOCs and formaldehyde content (UF or Urea-Formaldehyde) and/or that outgas (release the noxious vapors) relatively quickly. Low emission products include: Then having an outgas period before occupation is good when possible. Preferably during hot, humid weather which tends to accelerate the exit of gaseous residues from the building materials. If you have an existing wood material that is emitting formaldehyde, then the can be treated with scavenging coatings or encapsulated with vinyl materials. Another critical factor is having adequate ventilation, particularly during the initial outgas period. Many homes and multifamily dwellings are often built rather “tight” as a response to the desire for energy conservation and reducing moisture intrusion. If it is not a security issue, keeping the windows open even a crack on opposite sides to create a flowing cross-draft can assist out-gassing as well as opening chimney dampeners. How Formaldehyde Levels Decrease Over Time

The use of sorbents (gas absorbent materials) such as activated charcoal can be used to remove relatively high molecular weight VOCs such as toluene, benzene, xylene and methyl chloroform.

Other special air cleaners may also be used – consult ScanTech for further information.