DNA Damage in the Cell and Mechanisms of Cancer: A Quick Overview Part II

DNA can and is routinely damaged in many different ways through a variety of mechanisms, many of them from exogenous (external) causes, and some from endogenous (internal) factors. On average, this damage tallies out to an average of 10,000 to over 1,000,000 molecular lesions PER CELL EVERY DAY in the human body. (there are roughly ~ 1 trillion cells in the human body which indicates that at least 10^16 – 10^18 repairs occur in 24 hours)

Fortunately, most of this damage is either automatically repaired on the DNA itself or the damage can set off a global response to prevent reproduction of the mutated/damaged cell. But occasionally the body’s systems do not catch the error in time (or the damage is repaired incorrectly) and the cell is allowed to multiply into a tumor – either a benign or malignant cancer through a process called mutagenesis.

The forms of DNA damage can be classified by agent and the effect on the DNA strand itself.

1) UV radiation from the sun which is technically a form of EMF, but it is electromagnetic radiation that is at a high enough frequency / energy level that it is crosses over into the ionizing radiation regime. UV-A radiation can lead to the formation of free radicals which cause indirect damage. UV-B radiation can crosslink adjacent thymine and cytosine bases and create thymine or pyrimidine dimers, which is known as direct damage.

4) Chemical carcinogens including from natural sources (such as plant toxins or asbestos) known as mutagens. Particularly aromatic compounds that can insert themselves between the planar nitrogenous bases of the DNA helix. (also known as intercalating agents)

5) Hydrolysis (cleaving of bonds by water)

7) Some studies suggest evidence of damage from certain Electromagnetic Fields (EMFs) including both low frequency power lines and higher frequency RF (Radio Frequencies) including those in the microwave range which are used in cell phone / tower communication. This has never been proven conclusively, particularly at the power levels that are routinely encountered from these sources. The few studies that show damage of any kind come from levels that far exceed ordinary exposure.

1) Attack by Reactive Oxygen Species (ROS) or Reactive Nitrogen Species (RNS) generated in the course of normal bodily functions which can form hydrogen peroxide and ammonia respectively. (both are toxic) The presence of these compounds come from oxidative deamination which form oxoacids in the liver. 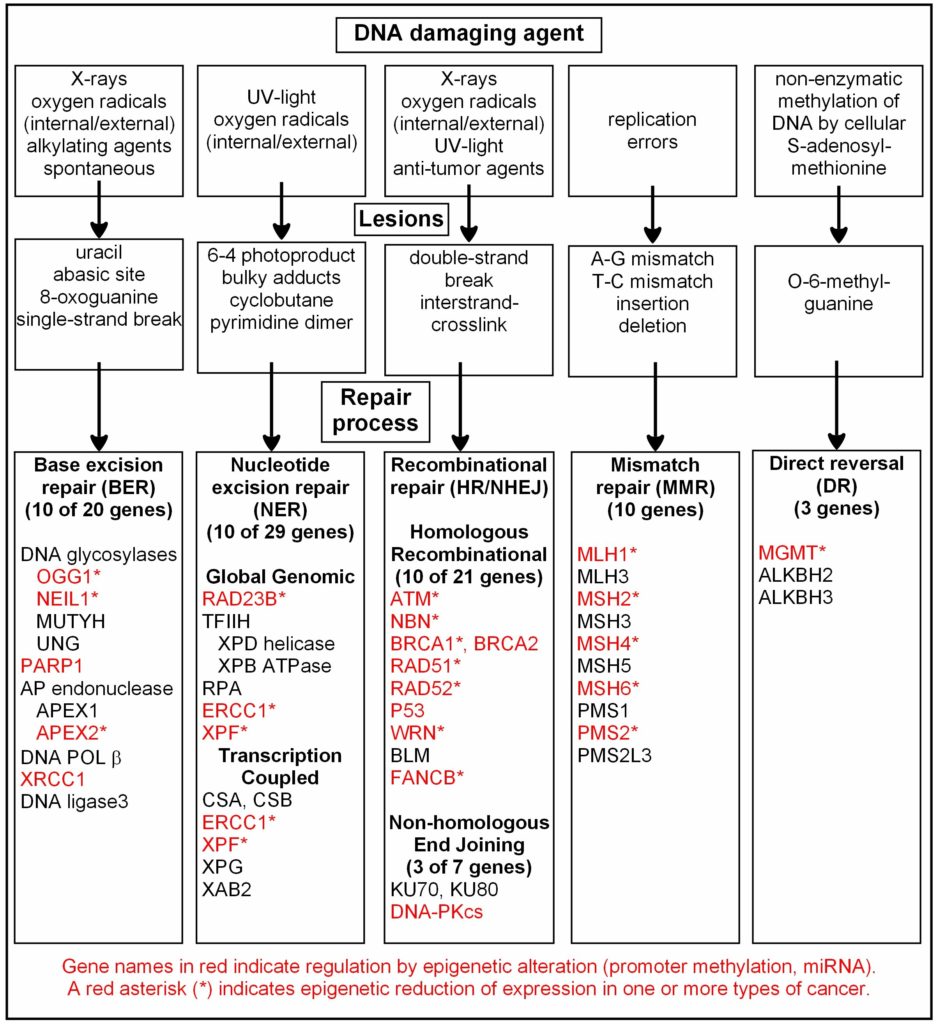 Point Mutation – A mutation that alters a single nitrogenous base. It can be either the substitution of one base for another, or the deletion / addition of a single base or small number of bases.

Base Substitution Mutation – The substitution of one base pair for another in DNA. Because of the degenerate nature of the genetic code, base substitution may or may not alter the amino acid encoded. If the new codon from the base substitution still results in the same intended amino acid, then the mutation is considered “silent”. But if it results in a different amino acid being produced, then it is termed a “missense mutation”  as the sense (bio-genetic intelligibility) of the codon produced after transcription of the mutant gene is altered. There are two categories: Transitions and Transversions. A transistion does not change the type of bases in the base pair as in a pyrimidine vs. a purine, but a transversion does. A variety of human genetic disorders (such as sickle cell anemia) are caused by base substitutions.

Nonsense Mutations – A special category of base substitution arises when a base is converted in such a way that the transcribed codon is converted to a stop codon. This stop codon results in premature termination of the translation and leads to a truncated (incomplete) protein.

Frameshift Defects – The addition or deletion of a single base has much more profound consquences than does the substitution of one base for another. Frameshift mutations alter the reading frame in the mRNA (messenger RNA) downstream of the mutation, which in turn will mean the majority of the protein will be altered. Frameshifts can also cause the same effect as Nonsense Mutations as 3 in 64 codons are stop codons which means there is a relatively high probability the protein coding will be prematurely stopped at the wrong point. 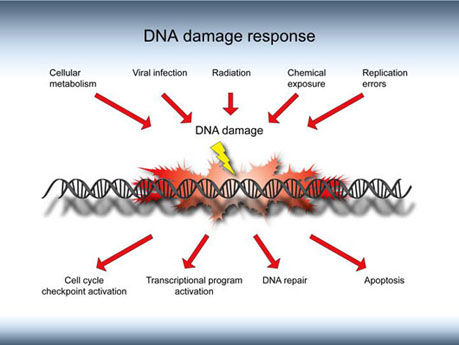 DNA Damage in the Cell and Mechanisms of Cancer: A Quick Overview Part I