The Difference Between Electric and Magnetic Fields

Direct current is simply a constant voltage with no change in polarity. (see the red line below) It is commonly found in batteries and is the output for virtually all AC adapters that plug into a wall.

Pulsating signals as shown in blue below are technically considered DC since the current never drops below the 0 axis line marked with the horizontal arrow. This output is what you would find on the output of a AC-DC power supply or other DC supply that has periodic noise on it.

Alternating current changes the direction of current within a conductor over some period of time. This is the form of electricity found in virtually all power generation and transmission over high voltage lines and in home electrical wiring.

AC power is almost always sinusoidal, but other forms of periodic AC can be signals in the form of sawtooth, triangle or square.

The variable gray signal shown below which crosses from negative polarity (below the horizontal axis arrow) to positive is more typical of a noise signal, though in the time domain it more likely to take the form of a transient signal or noise spike such as might be seen in lightning, a spark or arcing. 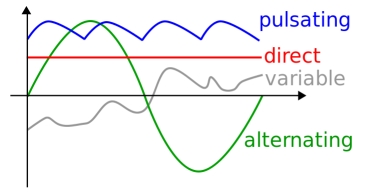 AC EMF fields vary in property based primarily on frequency regimes with respect to the size of the object they are affecting. Here are the three main domains they fall into:

In this regime, the E fields (Electric) and B fields (Magnetic) can exist independently or in engineering terms they are known as “uncoupled”. This is a consequence of quasi-static EM field theory which is a low frequency approximation for calculating such fields. The other theory which is used is electric circuit theory which involves Kirchoff’s Voltage Laws and Kirchoff’s Current Laws.

II. Wavelength of the field is approximately the size of the object they are affecting. This approximation is within an order of magnitude. (also known as a power of 10)

III. Wavelength of the field is small compared to the size of the affected object.

The Difference in Magnetic Fields and Electric Fields

Simply put, the electric field is a function of voltage potential between any two points. (in the case of the lamp below, there is a voltage difference between the hot and the neutral in the wire) The greater the voltage difference and shorter the distance, the higher the field.

The magnetic field is a function of current flowing through a conductor. In general, the higher the current, the greater the field though there is a “falloff” over distance.

As mentioned above, ELF frequencies such as 60 Hz AC power have electric and magnetic fields which are uncoupled or independent from each other. In the picture of the lamp below, the electric field is some non-zero value, but the magnetic field is 0 until the switch is turned on and current flows. 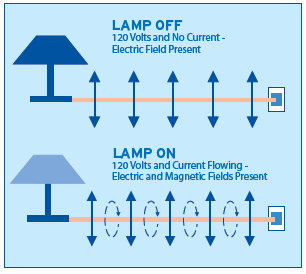 Notice that the electric field projects straight out from the cord while the magnetic field curls around the wire and follows what is known as the right hand rule as shown below. 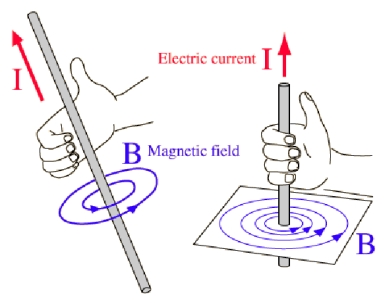