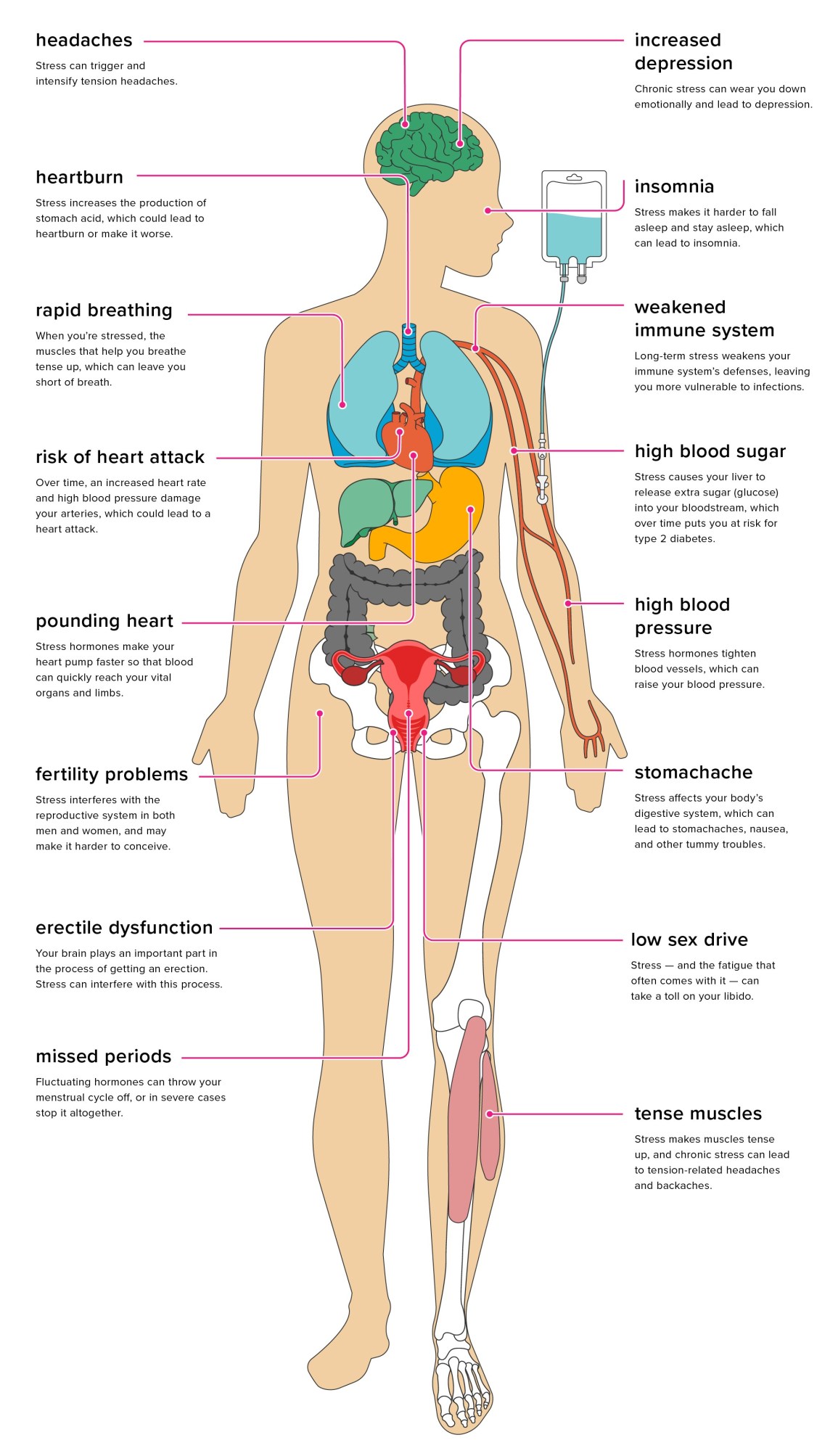 Various Stress Effects on the Body

Over the many years of performing surveys and residential / commercial consultations, I encounter a wide range of attitudes towards powerlines, and cell phones. Some are extreme, believing that everything even remotely electronic is killing us just by looking at it. Others scoff that invisible waves can do any real damage to the human body. But most people are at least curious and ask me: “Is there anything to all of the alleged studies that point towards our increasingly electromagnetically saturated life that is harming us?”

I feel the answer is both and in the middle of the extremes, but there are secondary effects that many people do not consider. For one, excessive stress of any kind is a proven killer, so if someone has a perception strong enough that a transmission tower or their smart meter is physically damaging them, the connection between the emotion and the chemicals generated in your body as well as the resulting metabolic changes tend to make it a self-fulfilling prophecy.

For example, cortisol is a hormone released by stress that also depresses the immune system. If you are chronically worried about something, your health is likelier to be impacted in a negative fashion. Also hypertension (high blood pressure) is definitively linked to stress and has been long denoted as the “silent killer”. Then there is the distraction factor; it is well known that those under extreme and / or prolonged stress are likelier to experience illnesses or accidents.

This is not saying that it is simply: “All in your head.” This diminishes concern to fantasy or delusion, whereas the physiological effects are real and can be empirically measured, regardless of the direct effects of the high voltage tower or cell phone repeater.

And what goes on in your head is very important as it directs your attitude, mood and where your attention is at a given moment.

Also, you should take into account the indirect dangers of our radiation emitting technology that have nothing to do with the EMF or RF itself. Consider the distraction of a cell phone while driving, or the sedation of sitting on the couch watching hour after hour of TV. How about spending hours a day on Facebook without having genuine face to face human interaction? It doesn’t take a genius to see where I am going with this.

Look at how it can potentially skew epidemiological studies. There is a factor called “confounders” which can mislead the directions of cause and effect. Are you aware that the original epidemiological study in 1979 by Ed Leeper and Nancy Wertheimer which suggested a link between childhood leukemia and high power lines did NOT actually involve EMF measurements? They simply drew conclusions based on “cancer clusters” and the diameter of the wire used to distribute electricity using the reasoning that a thicker wire carries more current and therefore the magnetic field is higher.

Knowing the actual physics of EMF reveals that this is a reckless and scientifically ignorant manner in which to gauge a potential cancer causing metric as there are many other factors which affect the actual net magnetic field as discussed in one of my previous posts. Poor critical thinking skills such as this is akin to linking the condition of a street sign with local crime. The sign itself does not have a direct bearing, but the social and demographic factors that the sign exists in may also give rise to conditions that affect crime rates.

Correlation is not causation.

Perhaps it escaped the original researchers that a higher density power lines also means you are closer to high population densities where you also have more traffic causing pollution, increased noise levels which can induce stress, industrial centers potentially releasing toxic chemicals into the air and so forth.

When you choose about where to live and what the risks are, you need to think holistically if you want to get an approximation of what falls into your acceptable definition of “safe”. Humans are predictive beings, but they are historically poor at realistic risk assessment. People worry about getting murdered or crashing in a plane when they are far more likely to die in a fall at home. So they buy a gun, or refuse to fly, but then try to paint on a roof while standing on the top step of a ladder which has a clear warning label.