Mercury in CFL (Compact Fluorescent Lights) – How Much of a Toxic Health Hazard?

I recently had a concerned homeowner in the Dallas area contact me regarding toxic chemical exposure, specifically mercury testing in the home as she was concerned about the previous owner possibly having dropped and broken a CFL lamp sometime in the past. The following is a transcript of our conversation online regarding the actual hazards of mercury exposure from a CFL lamp.

It does raise an interesting question – should you test for mercury in the home as with other potential heavy metal toxins?

I recall that recently on NextDoor.Com, I had a discussion about this with my neighbors and I share the perspectives of that discussion here and intercut some questions that were raised as well as some statements that I responded to.

“This is serious stuff, especially if you ever expect any children or pets to enter your home during the life of the structure.”

Only up to 6 % of the mercury in an average CFL (which is typically no more than 5 mg of mercury) is released in a break. (most of it is bound to the glass)

“CFL bulbs are dangerous because of their mercury content.”

A number of readers were alarmed that CFL bulbs contained hazardous mercury, and were worried about being exposed to it if the bulbs broke. “I have six kids,” one commenter noted. “I can’t take the chance of having these hazards in my house!”

But research indicates that while CFL bulbs do require more careful handling and disposal, the hazard may be blown out of proportion.

According to a 2008 article on the issue in the scientific journal Environmental Health Perspectives, CFLs typically contain from three to five milligrams of mercury—about one hundredth of the mercury content of the older thermostats that may still be found in some homes. Researchers have found that only a tiny fraction of that is actually released when bulbs break.

For example, in a study published in 2011 in the journal Environmental Engineering Science, Jackson State University researchers Yadong Li and Li Jin reported that even if left unattended for 24 hours, a broken bulb will release from 0.04 to 0.7 milligrams of mercury. The researchers found that it would take weeks for the amount of mercury vapor in the room to reach levels that would be hazardous to a child. That can be avoided by quickly following the U.S. Environmental Protection Agency’s simple procedure for safe cleanup.”

This isn’t plutonium and the mercury vapor dissipates rapidly over time – particularly after cleanup (hours or days at the worst) – it does not condemn a house for life. 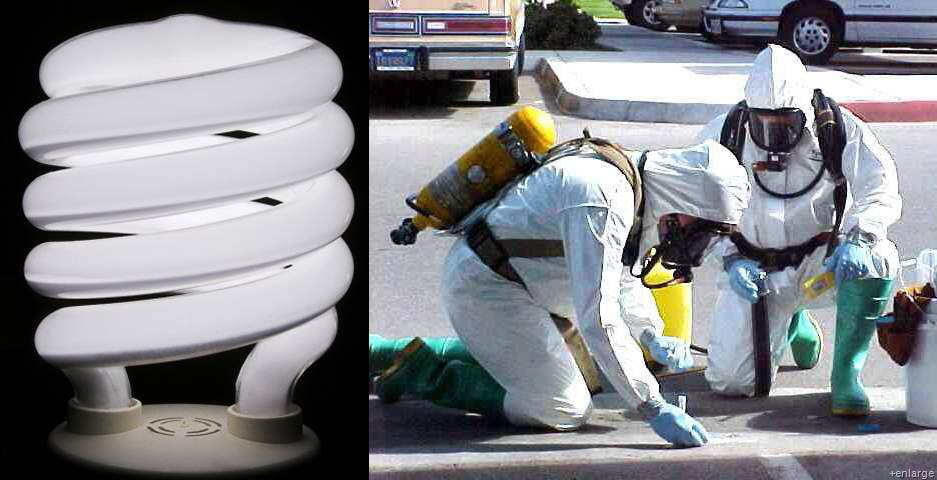 Study on Release of Mercury from Broken CFL Bulbs

I recently had a client who hired a “professional” service for a fluorescent lamp breakage and they wound up causing another longer lasting problem by using steam cleaning and releasing elevated levels of formaldehyde (again, I directly measured this) in the air from the carpet / upholstery as outgassing of VOCs are triggered by the application of high heat/humidity.

Fluorescent lighting in commercial buildings have been around for decades. You can kill / harm yourself faster and more commonly by accidentally mixing bleach and ammonia (available to the normal household) or having a carbon monoxide leak. Radon gas (of which over 10 % of all homes in Dallas County have a problem with which I have personally verified as I do testing and found numerous residences which exceed the EPA action limit of 4.0 picoCuries/Liter) is the 2nd leading cause of lung cancer (after smoking) in the United States and kills as many people as drunk driving. (approximately 20,000 +; also on the EPA site)

“OK I’m confused.Now this is the confusion for me because on one hand, you and the various reputable resources you shared, along with the AARP article, gives you some pretty scary recommendations about how to clean up after you break one. OMG…Get people out of the room! Especially children! Along with some rather painstaking steps to handle the potential spread of mercury. Don’t vacuum, shut off your air conditioner! But the message at the same time, is ahhh no worries. They are not dangerous.”

First, it helps to to know that in my background I have worked in some very dangerous environments including chemical labs, around heavy industrial equipment, cleanrooms, high voltage, biological hazards, etc. Some of the substances I have worked with are potentially lethal with mere skin contact within hours or minutes.

From that perspective, turning off the air conditioning, not vacuuming and keeping people clear of the area are pretty routine steps that do not induce panic in me. And whether you find them painstaking or not, they are the steps advised and outlined by the EPA which was explicitly mentioned in my response when I commented “You are correct in pointing out that you shouldn’t treat a CFL like any other broken object.”

If you are not comfortable, you can hire a professional, but I have witnessed horror stories and expenses upwards of $2000 – and some of them can make things worse.

For the risk versus cost factor, I feel perfectly qualified to handle a CFL lamp break. (which has happened before) I have also put out fires, was handling gallon jugs of sulfuric acid when I was 9 or 10, and been a first responder to an auto accident more than once, but that’s me.

I continue to buy CFLs for certain special applications, (mood / accent lighting) not general lighting though I still have some that are currently working. Those that burn out are NOT thrown in the trash as I have a special disposal area for used batteries, oil, paint, inkjet cartridges, CFLs, etc. that I take to the Garland hazardous waste facility located at:

Check hours before going as they are closed Sun, Mon and Fridays.

These were my main points – don’t go breaking a CFL open and suck the contents out like a Pixy stick, don’t dispose of it in a landfill (take it to a proper hazardous chemical center) and clean it up differently than a normal incandescent. But there is no need to treat it as a Biohazard Level 4 where you need Hazmat equipment and an extended quarantine of the block.

On the other hand, if your house was built before 1999, there is a chance that mercury is present in the paint as it was used as a biocidal ingredient so testing may be warranted in that case.