Environmental noise is a form of acoustic pollution which has the potential to disrupt human communication, create annoyance, damage hearing and is regulated by the federal OSHA (Occupational Safety and Health Administration) Noise Standard 29 CFR 1910.95 along with other state agencies. In some cases it can also interfere with sensitive equipment such as that used in the nanotechnology and semiconductor industry.

It is also regulated in many residential areas by municipalities such as Fort Worth and Grapevine to provide comfort and peace to residents.

So sound studies are generally divided into OSHA / worker protection dose exposure to hearing scenarios and “nuisance” noise for residential such as DNL (Day / Night Level) studies where the tolerable levels at night are invariably lower than during the day. The City of Grapevine for instance, has a night level limit of 52 dBA.
Based on experience, it is not only the sound level, but how distinct the noise is and what it “represents”. Sounds that are repetitive, impulsive, or have a negative connotation / association with them are less tolerated by residential sectors. For instance, I have done a number of exterior studies of Dallas indoor gun ranges and what you find is that the sounds emanating from those facilities do not raise the sound level very much; sometimes less than 1 dBA on average.
However, because it is a distinctive, semi-intermittent noise that can alter the mood of someone trying to relax on their patio / porch, etc. the actual sound level energy is not the predominant factor. There is a term in real estate called “psychologically impacted properties” and that term could apply to the above scenario.
What is unknown is if the noise sources at night will be distinct enough to be distinguished by future residents, OR if it will fall into the “white noise” of the ambient neighborhood? At X distance, can you hear a noise that seems out of place with the environment? Tolerance for noise is driven by context, expectation and choice. People will gladly pay good money to go to a concert or NASCAR event that arguably damages their hearing in both the short and / or long term, but will complain about a squeaky windmill, barking dog or train horn that comes by at 3:30 AM for 5 – 15 seconds.
And this is why ScanTech is very detailed about not just the noise levels, but also the nature of sound sources in reports and surveys depending on the scenario.

If you are receiving complaints from workers, or have been contacted by OSHA regarding a potential excessive noise issue, ScanTech can evaluate the environment for continuous (data-logging over time) and impulsive noise on the dB(A) and dB(C) scales to determine compliance. We can also fit workers with a continuous dosimeter to track sound pressure levels as they move into different work areas at different times of day. (meeting ANSI & IEC Type II standards) 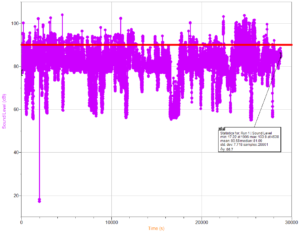 Our sound level meters are able to average noise at slow, (1 second per sample) fast (0.125 seconds per sample which corresponds to the response time of the human auditory system) or custom sampling rates as fast as 0.035 seconds which are used for impulsive (sudden, short) noise measurements. Impulse sounds are generally defined as acoustic events lasting less than 1 second with a repeat interval of greater than 1 second. 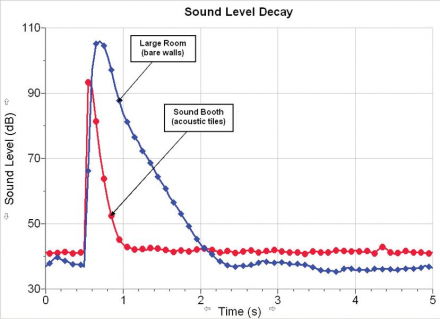 Because sound pressure levels are measured on a logarithmic scale, (power ratios of 10) an increase in decibels beyond a certain point means that the energy impacted on the ear can quickly pass a threshold where damage can occur. As shown in the chart below, even an increase of 5 dB can greatly reduce the duration before hearing loss can occur. 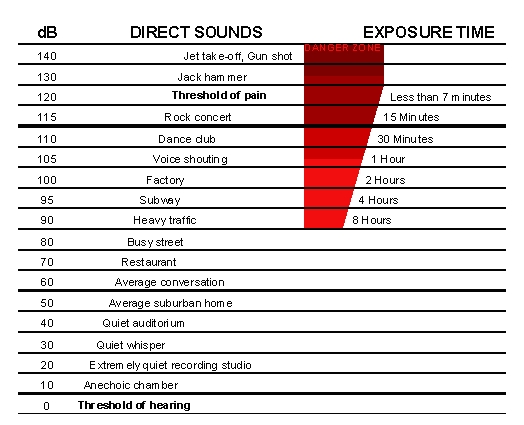 Note that sound levels above 70 dB begin to interfere with voice communication, while 75 dB and above are generally characterized as annoying. (but dependent on frequency as shown below)

The general effects can be studied in the response table below:

Hearing Damage from Different Noise Levels as Low as 70 dBA

Also, the human ear does not have a “flat” frequency response – so frequencies at the extreme edges of hearing perception (from 20 Hz to 20,000 Hz) are not perceived to be as loud as those centered around 1 KHz – 3 KHz which is in the range of normal human speech. 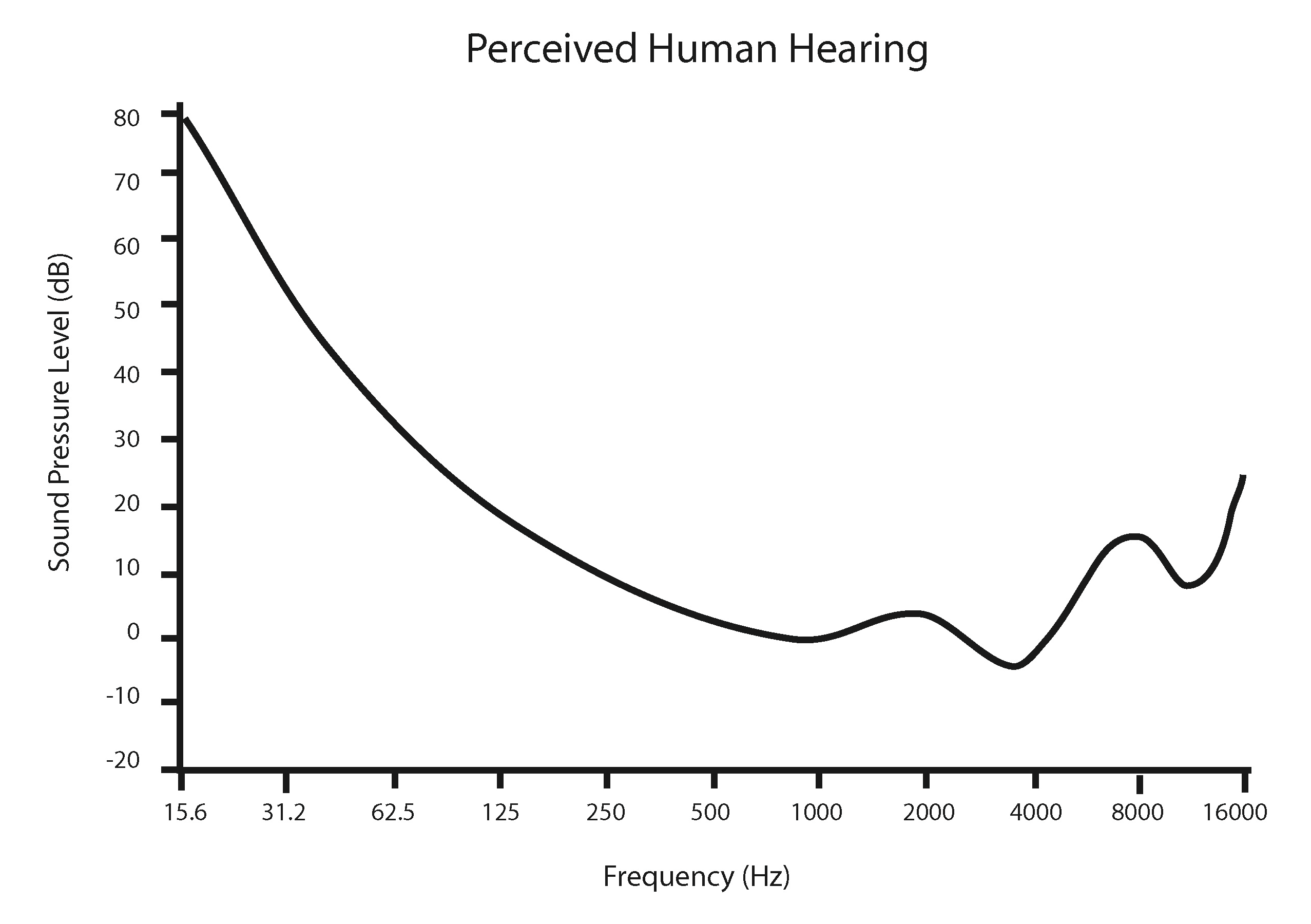 Therefore, different measuring scales on sound meters are used to distinguish between “human” hearing (dBA) and “machine” hearing (dBC) which has a flatter frequency response.

As an example of the sensitivity, a 1 dB increase in background sound level from 70 dB to 71 dB yields a 14 percent decrease in sentence intelligibility. The sensitivity of speech interference to noise at 65 dB and above is consistent with the criterion of DNL 65 dB generally taken from the Schultz curve. This is consistent with the observation that speech interference is the primary cause of annoyance.

ScanTech Technical Consulting also has experience in doing “on-paper” studies for environmental impact and Environmental Survey Assessments (ESA) including the DNL influence of major roadways, railways, airports, etc. including the CEQR noise level standards of New York City. There are DNL ordinances in cities like Fort Worth and Grapevine (Section 55 Part A 3) which is shown. Dallas does not give numbers, but situational guidelines for noise in the following link:

2. A sound level meter that meets the standards of ANSI with Type 2 or greater precision must be used to determine whether the level of sound violates those established in this section. The instrument must be maintained in good working order. A calibration check should be made prior to and following any noise investigation.

3. The sound levels must be measured at the bounding line between properties at a level five feet above ground level.

4. A sound level meter shall be used to determine the Leq in dBA over an 8 minute time period.

5. The sound receiving property with the most stringent requirements will apply.

7. All outdoor speakers in non-residentially zoned properties shall face away from contiguous residential zoning districts.

Corrections for Character of Sound Applied to Table 1. values are as follows:

Note that for the purpose of this ordinance, an impulsive sound shall exist when the sound changes at rate greater than 10 dB per second. The sound level meter should use Fast Response for this evaluation. 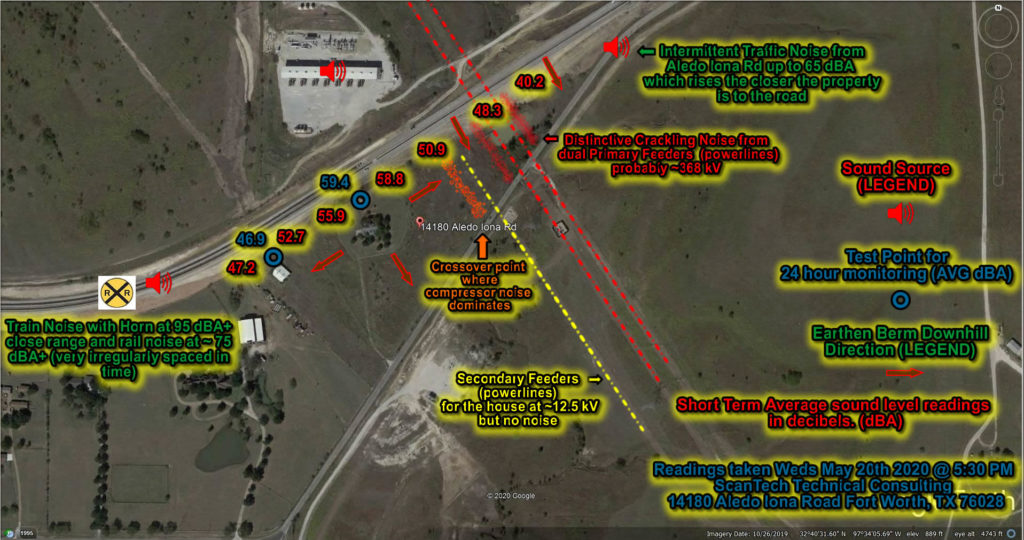 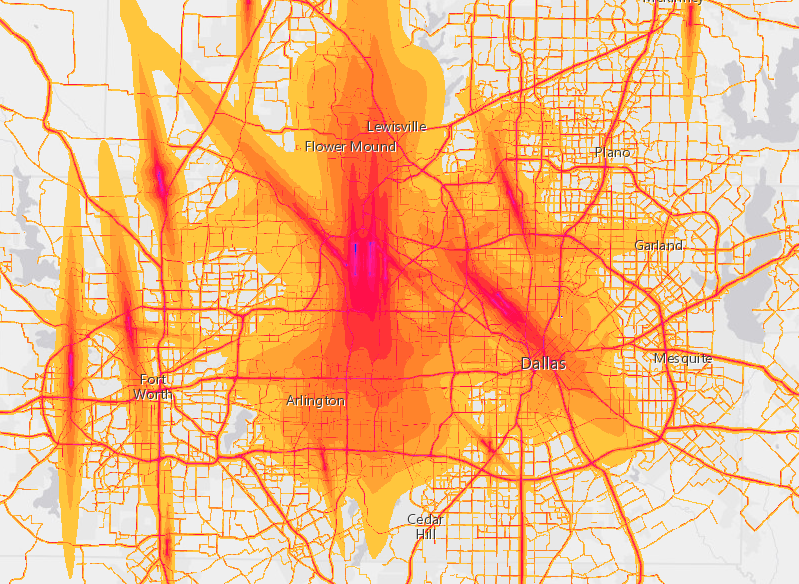 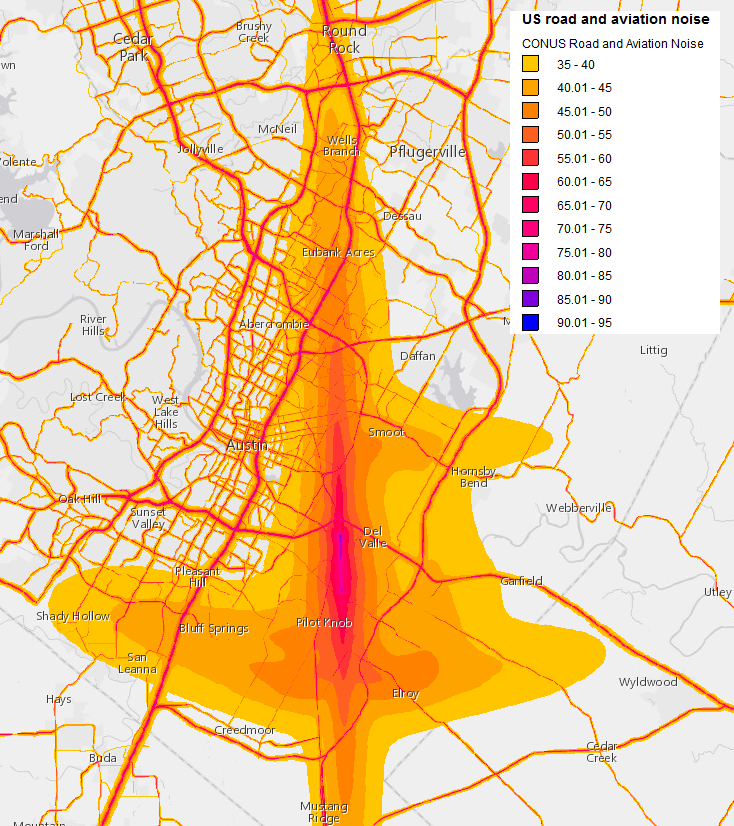 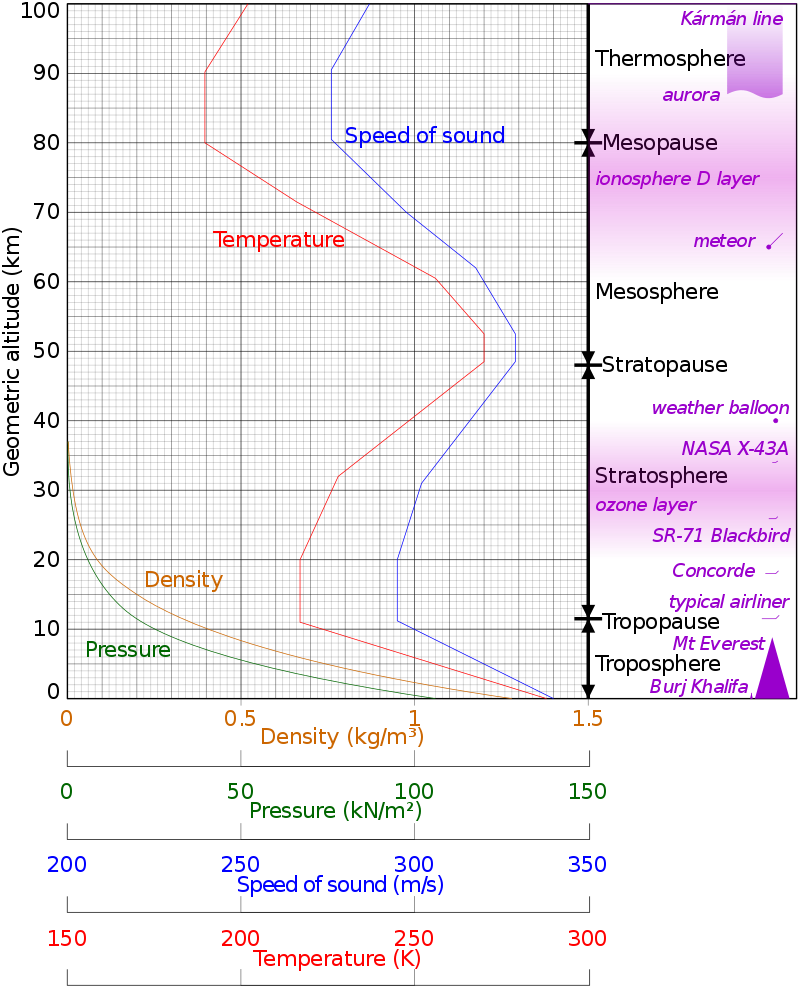 85 dB +  Noise level safety monitoring program must be in place