Silica Respirable Dust Testing:  Need to find out if your manufacturing / construction or other process is in OSHA compliance? Have concerns about other types of respirable dust or bio-aerosols in the Dallas / Ft. Worth area?

ScanTech can do dust sampling for gravimetric analysis and XRD identification of key compounds that can affect the health and safety of your workers. 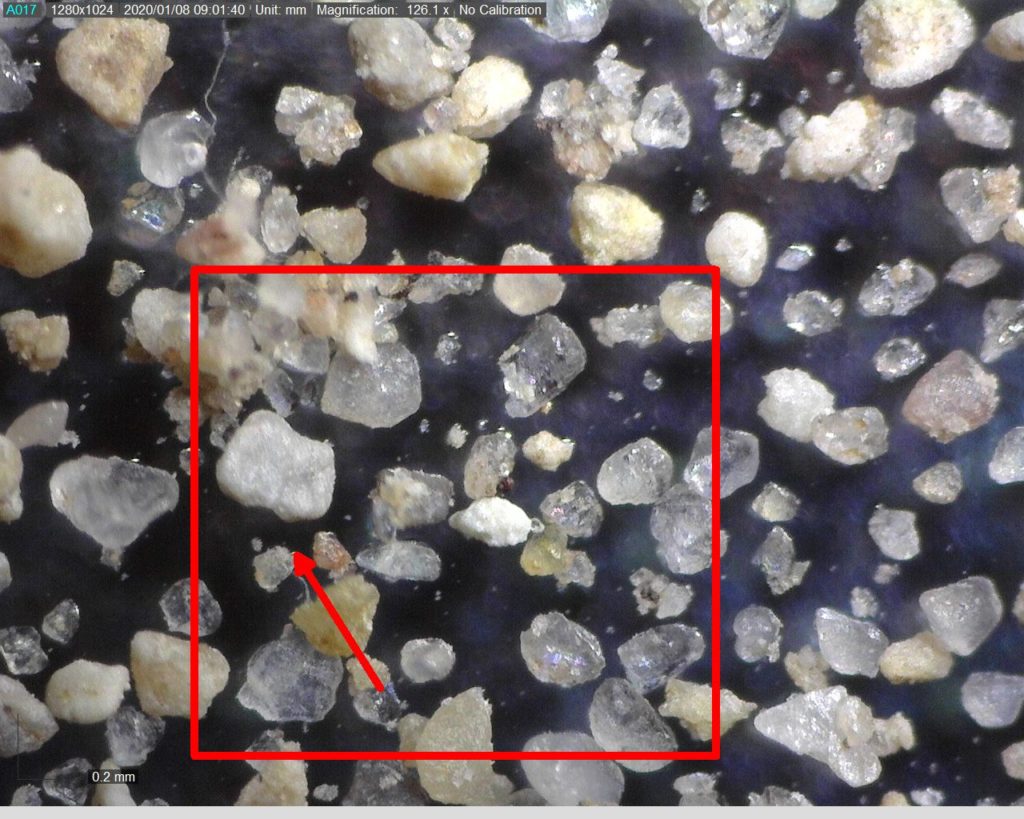 Silica Dust: While the standards have been on the books since the 1990’s, OSHA has begun enforcement of dust levels that contain silica in order to prevent a serious medical condition known as silicosis which is a form of pulmonary fibrosis. It scars and hardens lung tissue over continued exposure which makes the worker susceptible to diseases such as TB (tuberculosis) and COPD. Filter grades of diatomaceous earth also fall under this category. (Food grade DE has larger particles that do not bioaersolize easily) 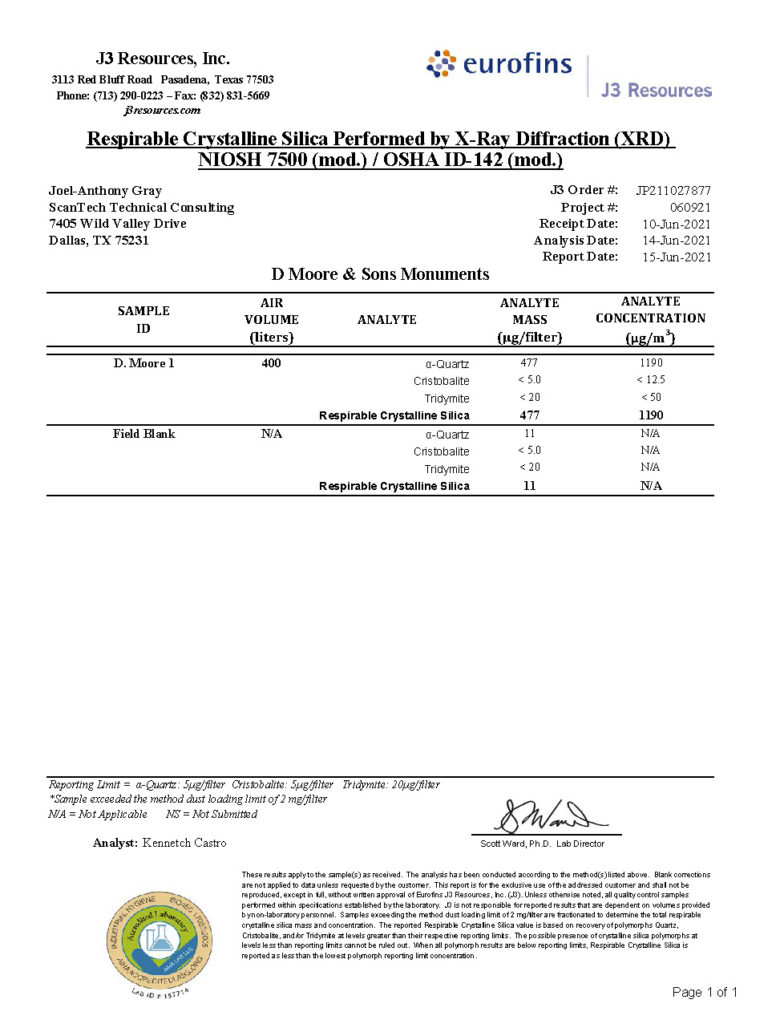 Grain Dust & PNOS (Particles Not Otherwise Specified): Can present a hazard for explosive dust such as with flour mills, grain silos and metal dusts. It is also considered a nuisance dust in that it can infiltrate human lungs to the point of causing respiratory disorders or exacerbating existing conditions such as asthma. Exposure to grain dust can also lead to sensitization and causing asthma or other allergic reactions which can compound other breathing problems such as Obstructive Sleep Apnea (OSA) and smoking. 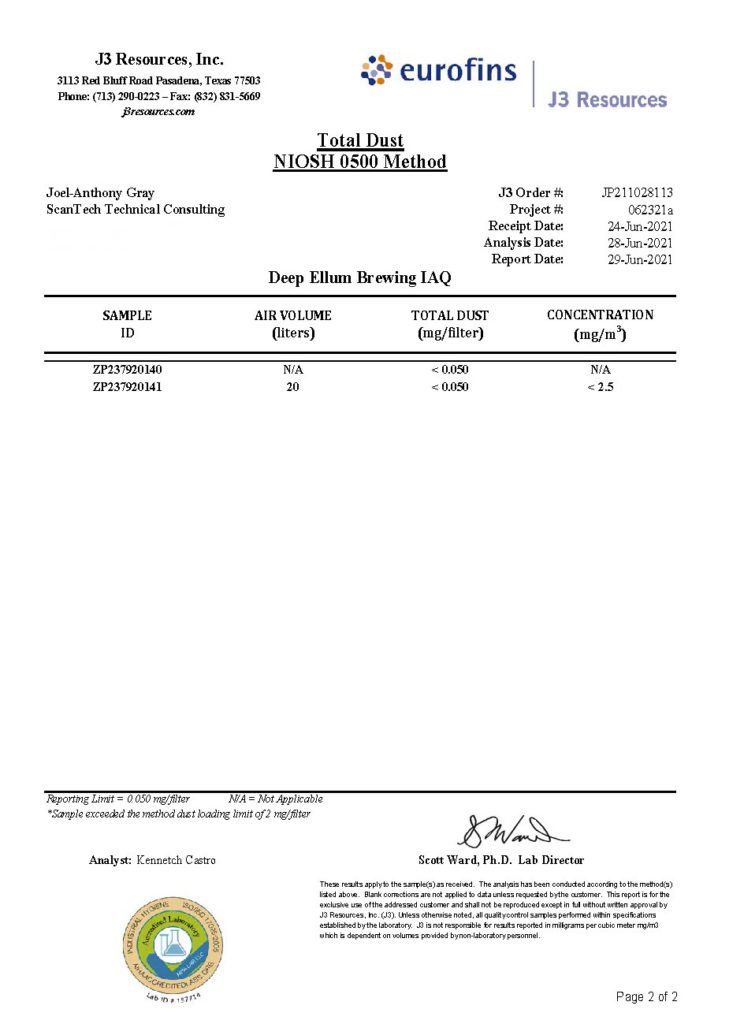 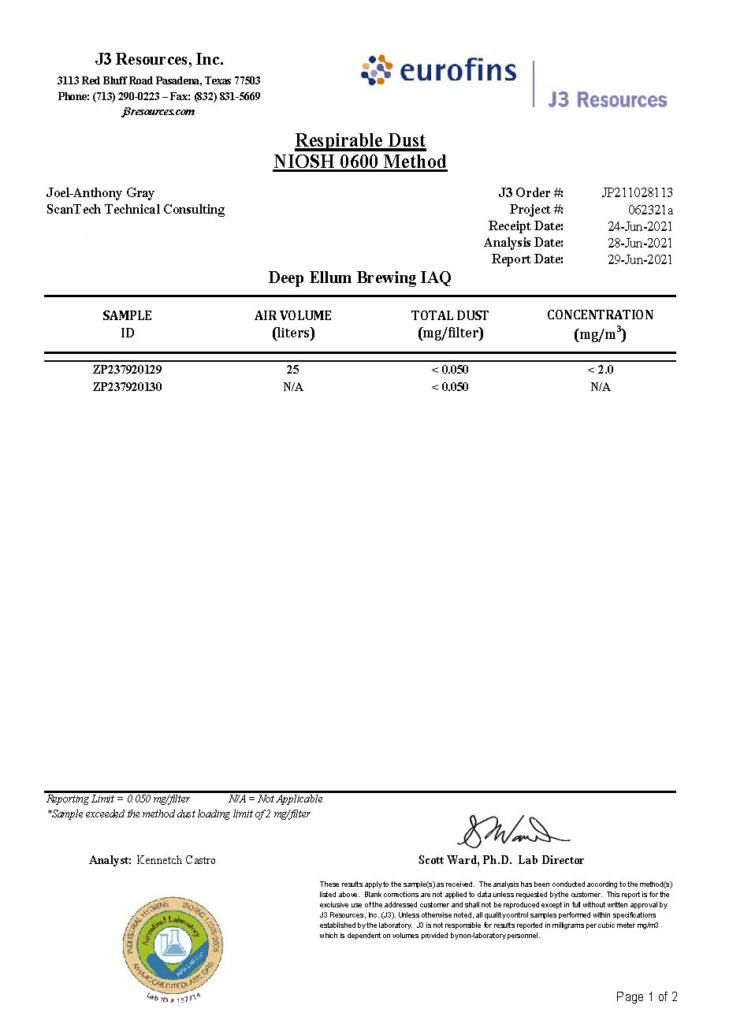 There is growing evidence that a large proportion of environmentally related or contributed illness is correlated with particulate phase (solid) and (to a lesser extent) gas phase exposures to contaminants produced by biological organisms such as mold, bacteria, dust mites, etc. And it is not just live organisms which are at issue, but even the RESIDUAL BIOLOGICAL MATERIAL of dead or non-viable fungus, molds, viruses, bacterial species and pets which can trigger symptoms and contribute or cause certain diseases.

Fungal & Mold Particles, Hyphal Fragments and Spores: Can either infect the lungs directly and cause diseases such as aspergillosis, and / or can deposit themselves in an area with food (such as cellulose) and a water source (small leak or fluid intrusion pathway in such a manner that unwanted mold colony growth occurs. 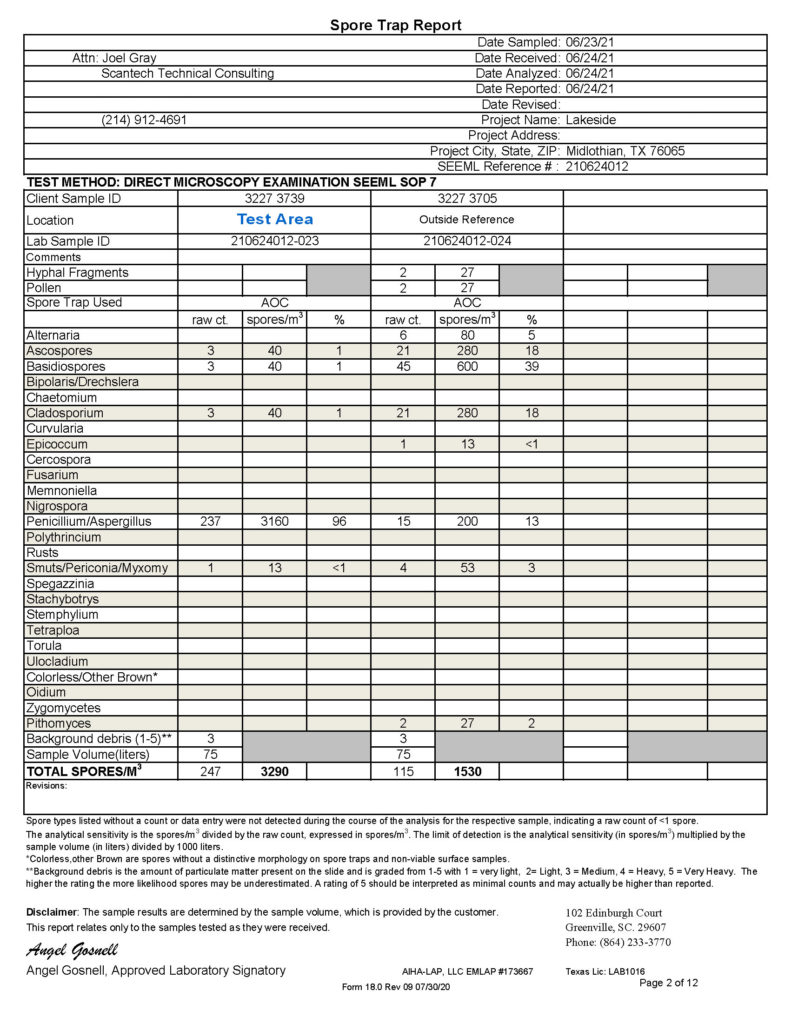 Nuisance Dust: A catch all term for dusts that may not fall under a specific chemical name that has yet been defined, but are recognized as being potentially hazardous because of the potential for smaller particles to become lodged in the lower respiratory tract where they may be difficult to dislodge and cause inflammation and breathing difficulties.

Bioaerosolized Dust: Generally an organic dust that has been mechanically ground down to a small particle regime (on the order of a few microns or less) that presents a potential hazard either as a human respiratory insult and / or possibly a flash-fire or explosion issue when suspended in air under the right conditions.

Organic Dust: Any carbon based dust that was once part of a living plant such as mold, pollen, sawdust, ground malt, wheat, food grains, etc. OR a living creature such as feathers, droppings, fur, etc. Such dusts can carry other living creatures such as fungus, bacteria, viruses, dust mites and so forth.

These contaminants from both live and dead biological organisms include antigens, endotoxins, glucans, mycotoxins, microbial volatile organic compounds, (MVOCs) and immunologically active particles produced by insects, arachnids, (mites / spiders) and common pets such as cats and dogs. Indoor carpeting can trap and exacerbate the levels of organic dust as most are almost impossible to clean completely and there are only a few brands which are hypo-allergenic and resistant to holding these contaminants in place. Another issue is using a non-HEPA vacuum as standard vacuums typically stir up and aerosolize the dusts and particulate matter throughout the entire volume of typical breathing space. If a TRUE HEPA vacuum (some brands of vacuums bill themselves as “HEPA-like” which is not the same) is used, then when it is emptied, it should be done outdoors while wearing the minimum of a P100 mask. (A P95 or P99 will work to some degree, but not as well as a true P100 with good fit-testing.

Other Background Debris: These are other things such as carpet fibers, human skin cells, insect parts, etc. such as described in an indoor air quality report below: 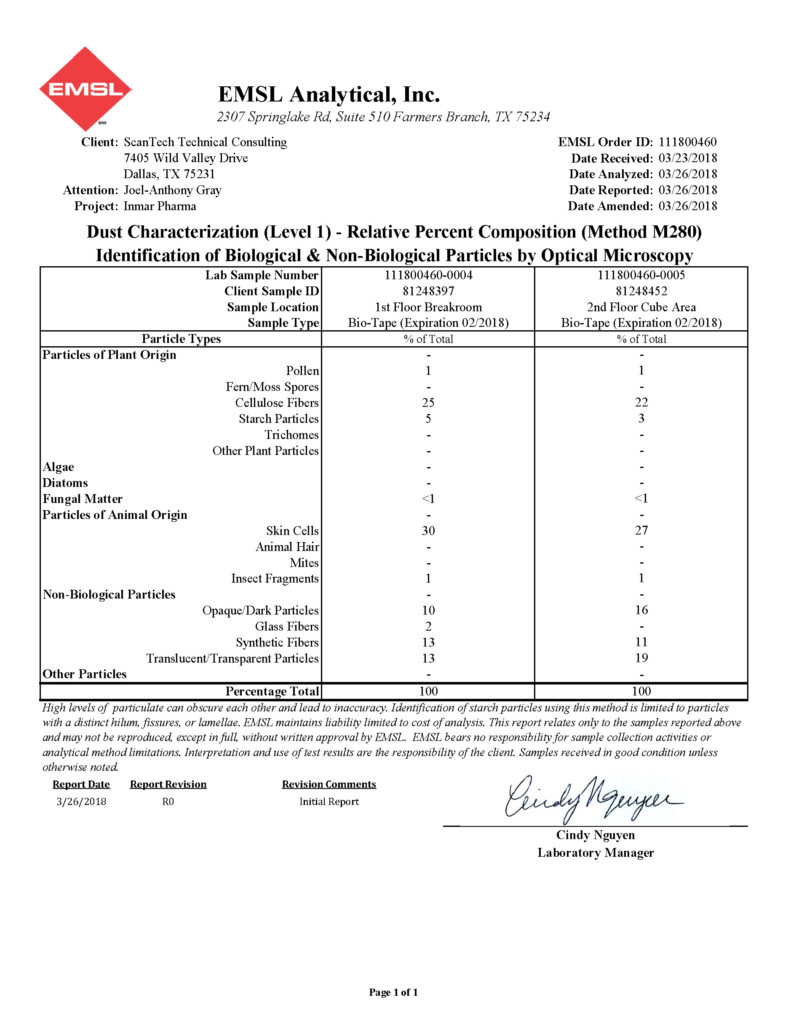 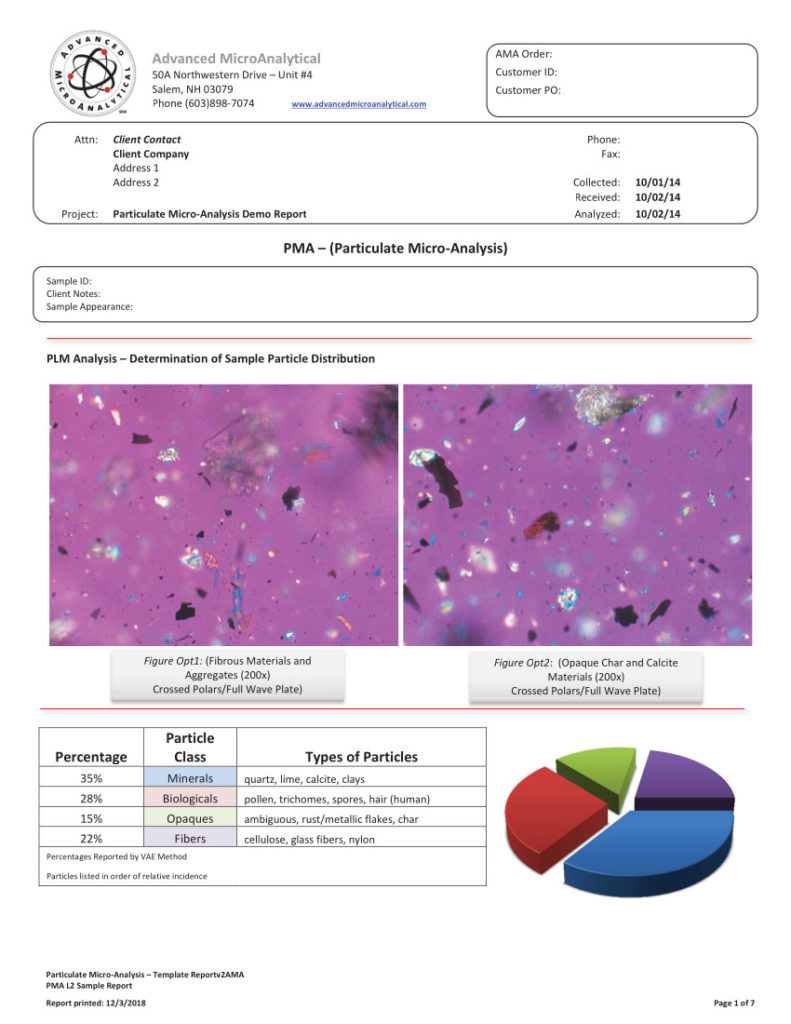 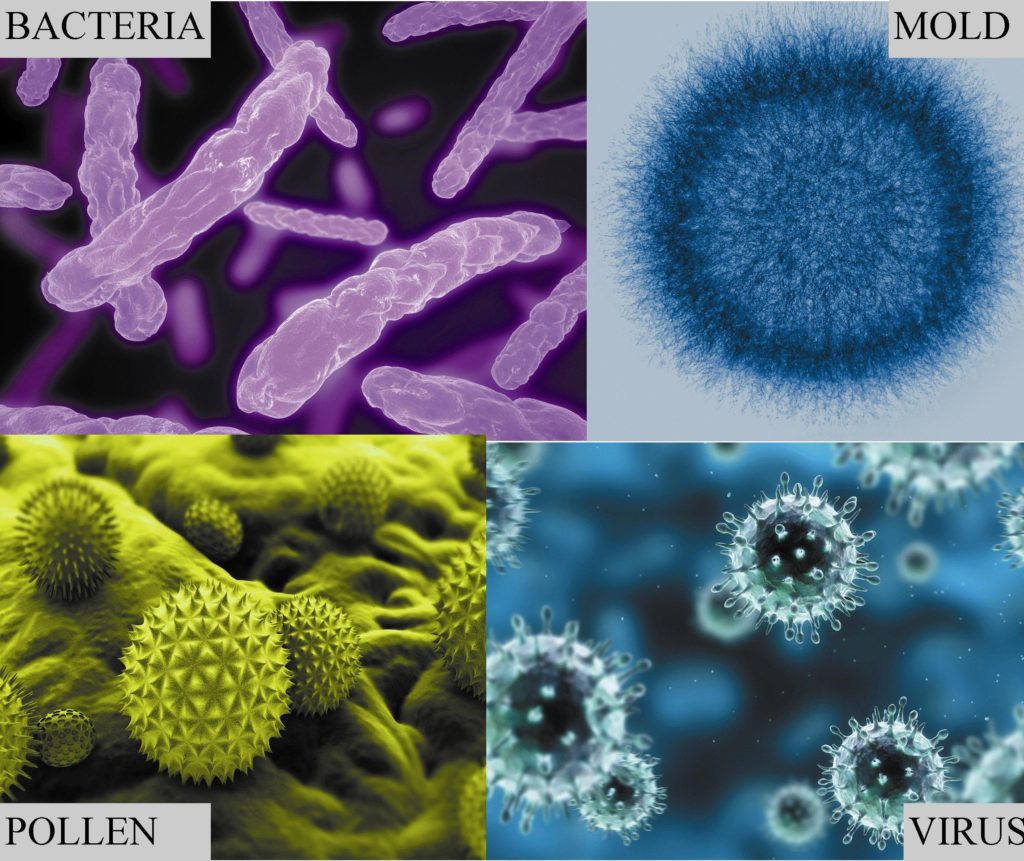 Live species of microbiological origin may cause infectious disease by airborne transmission which again stresses the importance of indoor air quality. With a heavy enough load, infection through contact and / or ingestion of heavily contaminated surfaces (not necessarily inhaled) could result. Exposures to mold spores / fragments and allergens produced by insects, pet danders may cause immunological reactions such as chronic allergic rhinitis and asthma which has a high prevalence rate in developed countries and resembles symptoms of gas phase irritants. Exposures to HIGH concentrations of small fungal spores and the spores of higher bacteria may cause hypersensitivity pneumonitis.

Exposures to fungal glycans, bacterial endotoxins (such as found in Gram negative bacteria) or MVOCs may also cause inflammatory responses in the respiratory system. Mycotoxin exposure may directly poison the human organ systems.

(2) The level of the annual NO2 standard is 0.053 ppm. It is shown here in terms of ppb for the purposes of clearer comparison to the 1-hour standard level.

(3) Final rule signed October 1, 2015, and effective December 28, 2015. The previous (2008) O3 standards are not revoked and remain in effect for designated areas. Additionally, some areas may have certain continuing implementation obligations under the prior revoked 1-hour (1979) and 8-hour (1997) O3 standards.