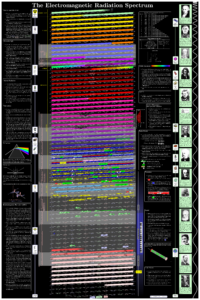 ScanTech Technical Consulting operates throughout the United States but particularly in the Texas region including Dallas, Houston, Austin, Fort Worth and San Antonio.

*EFFECTIVE January 1st, 2019 ScanTech will no longer perform residential testing OR consulting for homeowners / tenants – all services are COMMERCIAL ONLY. Here is a page for resources to other companies and common questions – CLICK HERE.

The following are some excerpts from a written consultation between ScanTech and a client who was interested in electromagnetic / radio frequency radiation safety standards. I feel that it contains enough thought provoking information, different perspectives and aspects as to how to examine what is considered “safe” with so many confusing EMF / Cell Phone safety standards and guidelines which vary from country to country and year to year.

Questions are numbered in orange – my answers that follow are marked A.

1. Under the section titled “Magnetic Fields – A Relative Comparison” – Just checking if the standards listed on Swedish Safety standard, California limit for Public Schools, New Swiss Standard and Maximum residential levels in CA are still current? Or have they been revised significantly?

A. The Swedish Safety standard listed – there is a disclaimer of 1.0 (mG) PROPOSED by the EPA which means this has never been passed or is enforceable. (and probably never will be due to the controversial nature of having the utility companies being liable) At the most they will do is make recommendations. (and even then, reluctantly)

Interestingly, when I look up the actual Swedish Safety standard, the Swedish Transmission Utility has a VOLUNTARY limit of 4 mG, but there is nothing signed into national law.

Checking further I think I found where the 1 mG proposal was taken from: There is a document reference ( Document Reference: Low-frequency electrical and magnetic fields: the precautionary principle for national authorities. Guidance for decision makers. September 1996.) where it states that:

“The following section considers ‘what is meant by a normal magnetic field level?’ and states that the median value for homes and day nurseries in major towns or cities is approximately 0.1 µT, (= 1 milliGauss) with 10% of homes having at least one room with a magnetic field exceeding 0.2 µT. (= 2 milliGauss)”

BTW, this excerpt/definition of a “normal magnetic field” is an observation, not a law or regulation as such.

Bear in mind that 1 milliGauss is what I personally consider very close to the level concept of ALARA (As Low As Reasonably Achievable) as getting this to 0 is nearly impossible if you are going to live in electrified civilization.

The old Swiss Standard was 10 mG which was passed into law as of Feb of 2000 by the Bundesrat (Upper House) and the last I heard was lowered to 2.5 mG, but I am now having trouble finding anything but anecdotal references to this change. I CANNOT find any conclusive law regarding this change.

The California limit for public schools are based on distance from power lines and not actual measured levels which I find to be a questionable standard. (more on my blog here: http://emfsurveydallas.com/emf-powerlines-distance-what-is-wrong-with-this-picture/ )

As for Maximum residential levels in California , I am not sure what you are referring to as this is not listed on my page Also, I thought I did have the CA distance laws on there, but I don’t see them anymore. (if you find these, then please point them out) I did find this document, but it is a statistical breakdown, not a regulation or law: 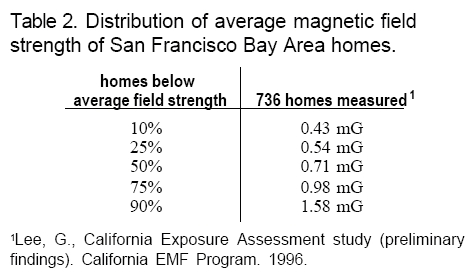 2. For section titled “ACGIH Occupational Threshold Limit Values for 60 Hz EMF, the Recommended 1996 maximum for workers by the NCRP but not yet official” lists 10 mG – has it been adopted since, or has it changed?

A. I found a link that references that question:

“The adoption of the ICNIRP guidelines results in a reference level for exposures to 50 Hz magnetic fields of 500 µT for workers and 100 µT (1000 mG) for members of the public.”

The short answer is that it appears that the British version of the National Radiation Protection Board (NRPB based in the UK starting in 1970) has adopted the 1000 mG limit, but the NCRP (National Council on Radiation Protection charted by the US Congress in 1964) has not taken an official stand on this, though there is a recommendation from 1999 regarding a similar 1000 mG limit for the edge of ROW.

In arriving at the proposed guidelines, the committee has considered available laboratory studies on bio-effects and epidemiological reports of health hazards from electric and magnetic field exposure. Lacking a basis for calculation of cumulative dose, these guidelines have been determined without drawing distinctions between acute and chronic exposure. They have not determined exposure levels from safety factors frequently used with other agents, nor has there been special consideration for sex, age or potentially sensitive populations, such as pregnant women, because current knowledge of mechanisms of field interactions does not allow identification of those likely to be affected. In medical diagnostic and therapeutic applications, these guidelines would exclude patients, but would apply to physicians, nurses and to all other health providers.”

Incidentally, they have up to 4 different options listed in this report that are suggested limits, but what I am reading between the lines here is that they are reluctant to take a firm stand on the issue because it is politically, medically, financially polarizing.

The reference is from here:

** Melatonin is a hormone generated in the pineal gland, controlling the day/night rhythm. Reduced levels of Melatonin can provoke depression, agitated melancholia or insomnia, as well as well as debilitation of the immune system. Furthermore it reduces free radicals, which are aggressive molecules which are capable of mutating genotype and thus causing cancer. Thus, decreased levels of Melatonin cause an increased risk for cancer. [sic – not necessarily the views of ScanTech]

As for “many scientists”, that is a subjective term. I can find references to studies which both support the link and others which suggest there is little or no link . Here are two:

Furthermore, I would caution using any particular value such as 10 mG as a magical value or limit of effect, particularly since it is an easy to remember round number. Any outside energy field or environmental factor can potentially alter the biochemistry and long term effects on human health. The question is complex because you have to take into a number of other variables, holistic factors, etc. such as genetics and the individual’s body to keep biological processes in equilibrium / homeostasis.

3. Same section as 4 – Is the Aaronia E2 recommendation from 1996 now official or has it changed (referring to the 1 mG NCRP max for private individuals)? ( I will look up Aaronia in an internet search, but I may ask you what that is if I can’t find it)

A. Aaronia is an equipment manufacturer that has a vested interest in selling EMF related equipment, so while they may provide some useful reference material, I would not see them as the last word in what is safe and relevant information as far as EMF safety information.

Always consider the source of any material and the potential bias.

4. I found the following statement according to the 2012 Bioinitiative report. I am also attaching the link to it. LOW EXPOSURE LEVELS ARE ASSOCIATED WITH BIOEFFECTS AND ADVERSE HEALTH EFFECTS AT CELL TOWER RFR EXPOSURE LEVELS

“At least five new cell tower studies are reporting bioeffects in the range of 0.003 to 0.05 µW/cm2 at lower levels than reported in 2007 (0.05 to 0.1 uW/cm2 was the range below which, in 2007, effects were not observed). Researchers report headaches, concentration difficulties and behavioral problems in children and adolescents; and sleep disturbances, headaches and concentration problems in adults. Public safety standards are 1,000 – 10,000 or more times higher than levels now commonly reported in mobile phone base station studies to cause bioeffects.”

A. To be blunt, I am not particularly impressed with the 2012 Bioinitiative conclusions or recommendations because I find the references in their conclusions to be inconsistent, sloppy and their attitudes needlessly alarmist. Which five new cell tower studies? Can they at least quote some specifics and show some data/graphs on this? (for instance, author, publication, year, volume, etc.) What frequencies in particular are they talking about? 900 MHz? 2.4 GHz?

I can guarantee “bioeffects” occur with nearly any kind of environmental change such as temperature, water quality, light levels, particulate matter in the air, etc. However, the human body has an equilibrium correction system (known as homeostasis) that compensates for a wide range of variation in these and other variables – otherwise we would not live nearly as long as we do on average.

I even went to Section 6 and randomly pulled a paper which allegedly supported the claim of single and double strand DNA damage. In part 7 of the second paper by Dr. Lai I found this quote:

“7. It must be pointed out that, consistent with previous research, not very much of the cellular and animal genetic research data directly indicate that EMF (both RF and ELF EMF) is a carcinogen. However, the data show that EMF can possibly alter genetic functions and thus it is advisable that one should limit one’s exposure to EMF ”

So right there, they contradict themselves by pulling a paper that admits that there isn’t much data to support carcinogenic effects from EMF and RF fields.

“May possibly alter genetic functions?” What kind of vague and unscientific warning is that? That’s like telling someone they might have a car accident next year. It is a form of speculation that is worse than useless regardless of the outcome as there is no causality link or empirical data given.

5. A new suggested RFR precautionary level A reduction from the BioInitiative 2007 recommendation of 0.1 uW/cm2 for cumulative outdoor pulsed RFR down to something three orders of magnitude lower is justified in 2012 on a public health basis. A precautionary action level of 0.0003 uW/cm2 to 0.0006 uW/cm2 is suggested.

A. The only way they ( Bioinitiative extremists) will be happy is if we have no RF, cellular or wireless devices at all which is completely unrealistic for a functioning technological society. Keeping all ambient RF levels in the picoWatt/cm^2 range or less is in my opinion, delusional without any compelling evidence.

6. I am concerned about this new information. Could you please share your thoughts about this?

A. I actually went to the university library and pulled a few papers by one of the authors quoted in the RF Color Chart section:

I could not find a 2006 paper on this, but I did find more recent papers (2008 and 2013) dealing with this subject by Bahari. For one, the power levels used on the rats were much higher than 340 picoWatts – more like 200 mW to several watts so I don’t know where this much lower number is being pulled from. 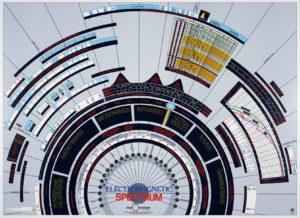 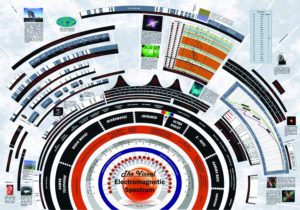 MAGNETIC FIELDS BY ORDERS OF MAGNITUDE